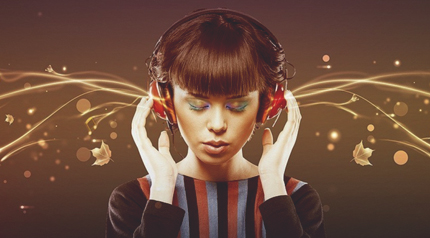 The term «music therapy» is of Greek-Latin origin and means «treating with music».
Music therapy is developing as integrative discipline at the intersection of neurophysiology, psychology, reflexology, musical psychology, musicology, etc. It increasingly sets in the status of a universal educational system capable to optimize the process of personal human development in difficult conditions of modern public life.

Music therapy as a method of Vito-mathematics relieves stress, helps in meditation, helps you set yourself up for the result. If you use the integrative form, i.e. combine music with mandala, the effect increases several times. Music is written for each person individually, on the basis of its metric data-name, surname, patronymic and date of birth.

As early as in the 19th century scientist I. Dogel found that blood pressure, frequency of the cardiac muscle contractions, rhythm and depth of breathing change under the influence of music both in animals and in humans.

Famous Russian surgeon B. Petrovskiy used music during complex operations: according to his observations, the body starts working more harmoniously as a result of music influence. An outstanding neuropsychiatrist academician Bekhterev believed that music has a positive effect on breathing, blood circulation, eliminates growing fatigue and adds physical vigor.

ABOUT THE ESSENCE OF THE INFLUENCE OF MUSIC

Today it is fashionable to talk about the effects of music, music therapy. One of the facets is the connection between the influence of music and psychology. The theme is not new. «Psycho» is «soul», «logy» is «science». And the connection between music and soul is direct. Of course, we mean the music, performed with putting heart into it, the music, where the soul is present.

Let’s sort it out and see: so, the soul. What is the soul? Before you continue to read, take a sheet of paper and a pen, write several definitions on your own. Ready? Don’t be lazy, if you are reading this, it’s not a coincidence, you will need it.

If the soul is an intangible essence (according to Wikipedia), a special force, then how is it related to the material world? OSHO said in one of his conversations that love is useless in the context of business, is it necessary when you need to buy or sell something? But he is full of satisfaction with his live and love to people and to the truth, you can notice it at once. OSHO is watched and read more and more, his personality is so attractive! He is alive, complete and intellectual — it is not a little, is it?

If I’m talking about the soul, then I mean inner world. «A stranger’s heart is a deep well — it’s too dark there to see well» — an English proverb. It is in some extent, if yours is such. And now, a step toward the soul. The starting point is feelings. (Opened soul is filled with love). The objective of development (never achievable, because infinite) is integrity, wholeness, unity of thought-feeling-desire-action, single flow of energy, piercing from the top to the bottom.

Feeling is a strength of the world (as one dear teacher said), Castaneda seems to have something similar. What is the strength? The beauty of thought which you can see in the picture, impressed me at the time too:

Feelings is a structure of the soul. If you cannot switch from one feeling to another one, you are lack of the necessary flexibility, the feeling which the soul is permanently in will be called basic. Reflect alone on what feeling is the most common for you. You can also take a test on what feelings (as an attitude to this) predominate in what sphere of life.

The motion from the center to the periphery is the descent (you can say to the hell), visa versa, ascension, in condition of the Earth is much more energy intensive, the soul of a man like that was called «hard-working» in Soviet times.

In the childhood, fear turned off the state of love (especially parental), this condition is called spoilage in healing, and startle in psychology. It is treated (with the help of prayer inclusively), but unfortunately and fortunately, mankind is doomed to experience fear, so by the age of 20 young people often reach indifference in their experience, it cannot be treated, if it’s unconscious, unperceived.

Thus, after the period of staying in the neck of the hourglass, the last test starts — we either begin to move consciously towards the center-heart-love, or go to the recasting like space debris, like Peer Gynt, who Solveig stood bail, her love, for just before the departure.